His Majesty the King Chairman of the Al-Quds Committee 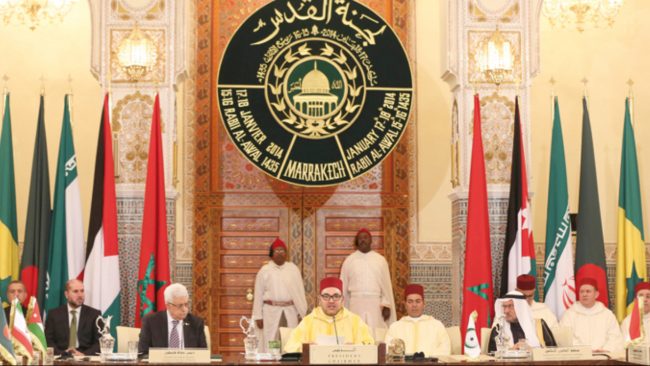 His Majesty the King, Mohammed VI, King of Morocco, is a descendent of the Alaouite offspring, originally from Yanboo Al Nakhil, a small oasis of the Arabian coast on the Red Sea. Directly descending from the prophet of Islam, Sidna Mohammed, via his daughter Lalla Fatima Zohra, the Royal family came to settle in Sijilmasa, in the Moroccan South, in the middle of the 13th century. His Majesty King Mohammed VI is the 23rd king of the Alaouite Dynasty, the reign of which started in the middle of the 17th century.

His Majesty King Mohammed VI, son of the late King H.M. Hassan II, is born on August 21, 1963, in Rabat. At the age of 4, his august father enrolled him at the Koranic School of the Royal Palace. On June 28th

1973, His Royal Highness the Crown Prince successfully completed the certificate of his primary studies, and finished his secondary studies at the Royal College where he received his Baccalaureate in 1981. He is graduate of University Mohammed V.

In 1985, Crown Prince Sidi Mohammed got his Bachelor’s Degree in Law from the university of judicial, economic and social studies in Rabat. The subject of his thesis was “The Arabo-African Union and the Kingdom’s Strategy in International Relations”.

In 1987, he got the First Certificate of high studies in political sciences.

In July 1988, His Royal Highness, Crown Prince Sidi Mohammed, successfully completed his exams in the Second Certificate of high studies in public law.

In order to complete his training, and to practice the principles and rules of law at the college, the Late King Hassan II decided to send him, in November 1988, to Brussels with Mr. Jacques Delors, President of the Commission of the European Economic Communities, for some months. Even at a young age, Crown Prince was always asked by his august father to carry out different missions at different levels: national, Arab, Islamic, African and international towards head of states and friends. His Highness took part, thus, in many international and regional conferences.

The first official mission abroad of His Highness Crown Prince took place on April 6, 1974, when he represented His Majesty late Hassan II at the religious ceremony celebrated in the cathedral “Notre Dame de Paris”, in memory of the French president, Georges Pompidou.

On November 26, 1985, His Highness Crown Prince, Sidi Mohammed was nominated, by his father, as a Coordinator of Services at the General Headquarters of the Armed Forces. An assignment well carried out by the Crown Prince, who knew how to accomplish many different missions.

On October 29, 1993, His Highness Crown Prince received, at the University of Nice-Antipolis in France, the title of a Doctor in Law with distinction.   The thesis title was: “Cooperation between the European Economic Community and the Arab Maghreb Union”.

Morocco and the European Union on the eve of the 21st century.

From June 21 to 27, 1997, His Highness Crown Prince Sidi Mohammed represented the Late King Hassan II in the works of the Extraordinary Session of the United Nations General Assembly on the Environment, entitled “Land Summit+5”.

On 23, July 1999, H.M. King Mohamed Ibn Al Hassan Ben Mohamed received the pledge of allegiance, in the Throne Room of the Royal palace in Rabat.

On May 8, 2003, His Highness Crown Prince Moulay Al Hassan was born in Rabat.